Nu-Nu is two weeks old now and fast coming up on three! Her birth (and the pregnancy with her) feels like a moment ago and yet it also feels like she has always been a part of our family. We fall more in love with her every day.

Thus far, either she’s a reasonably easy baby or we’re just better used to this whole parenting thing. The sleep deprivation feels much less destabilizing than it did the first time around. She wakes up every 2-3 hours to nurse at night, but since she’s sleeping in our room, it’s easier to grab/feed/change her and get her back down without too much effort. Last night she actually went for a 4-hour stretch between feeds and I felt like I’d just had a full night’s sleep! I don’t think Smudgie did that until he was close to 2 months old.

She’s also taken to the carriers and slings better than Smudgie did, though I’m not sure whether that’s because we’ve started her in them earlier than we did him or because I’m more confident about baby wearing having been through it with my boy already, or just a temperament thing. Whatever the reason, I’ve gotten out with her around the neighborhood in the carriers twice. We’ve been so much more active with her so much earlier–she’s been to four restaurants, a museum, and a family holiday party already! My physical recovery has gone much easier this time, which helps. LG and I also both agreed that taking a newborn to a restaurant feels so easy after the past year of wrestling with a wild, uncooperative toddler in eating establishments, so that doesn’t feel like a barrier the way it did the first time, either.

And the museum– well, it’s been cold and even rainy lately, so we haven’t been taking Smudgie to the park much on the days we were all home. Saturday we knew we had to get him out of the house before he destroyed it, himself, and our relationships with our downstairs and upstairs neighbors. We live a short bus ride away from the MTA Transit Museum in downtown Brooklyn– Smudgie has lately become fascinated with buses and subways, so it seemed like the perfect trip. And it was! Nu-Nu slept peacefully against LG in the ergo for almost the whole time, a lunchtime nursing session excepted. Meanwhile, Smudgie got to ride a bus (“Want to go fast!”) and then “drive” a bus and traipse through subway cars at the museum. He was disappointed that none of the historic cars moved, but had a great time nonetheless. 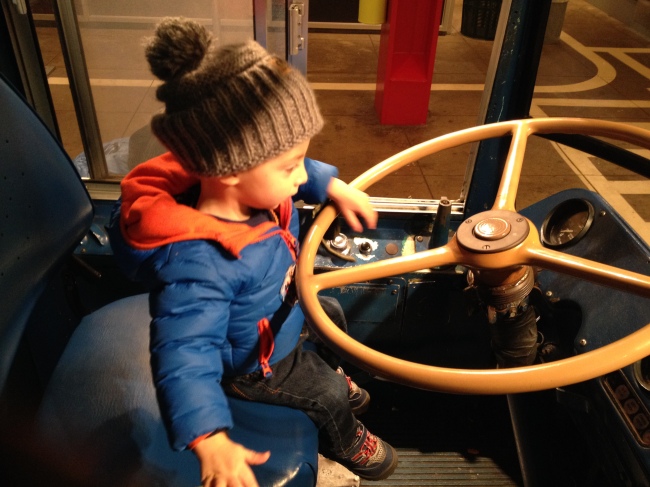 Smudgie insisted “On the hat, on the jacket” the whole time we were at the museum.

We finished off our day with lunch around the corner at Shake Shack–which Smudgie actually ate for a change!–and then a long wait for the bus back home after we just missed one. Smudgie melted down at that point, but Nu-Nu kept sleeping and we made it back in one piece and put the boy down for a long nap.

That was a great day, and I can’t help dwelling on it a little. Other days have been not as good. Like a lot of toddlers, Smudgie is having a tough time with this adjustment. He’s perfectly fine to his little sister, if a bit stand-offish, but he’s frequently been a beast to LG and me. Hitting if we’re not paying attention to him, whining and begging for treats, pulling power plays over dinner and dressing, refusing to listen to our requests, getting into mischief and grabbing things he knows he’s not allowed to touch. Typical 2-year-old antics,  but amplified thanks to his jealousy and confusion. I try to be very patient and understanding, to ignore the misbehavior or redirect, but it can be hard. And I haven’t even had to handle the two kids on my own yet!

Still, I know this is a phase. In between bearish fits, Smudgie is still my sweet, loving, affectionate and adorable boy. And I know that a few months from now Smudgie may still be a troublesome 2 year old, but he’ll also be better adapted to his new family. Maybe at that point he’ll even be willing to pose in a picture with his sister. Too late for the Christmas card, but that’s just how it goes sometimes.