So back to our 900 square foot apartment, which sounds I know like an unlivable box to most people. I’ve found a strange inverse relationship between space and the people in the space in the five years since we moved here–the more people we add, the more conscious I become about spatial arrangement, organization, and cleanliness and the bigger and more pleasant the apartment feels to me. It probably seemed the smallest the morning after we moved in, when LG went to work and I crawled out of bed to survey a living room full of unpacked boxes and I started crying and wanted to go back to the giant living room of our Upper East Side one-bedroom. And then I started unpacking.

Over the years, I’ve learned a lot about how to manage life better in smaller confines. For instance, we used to use Smudgie’s room as an office/guest room/all purpose holding area for a lot of crap. Before he was born, we downsized our giant wooden desk that took up half that room to a tiny cabinet unit and we got rid of the spare bed and either donated, sold, or found new storage spaces in the apartment for the rest of the detritus that we were keeping in there. The result: a much more spacious feeling room! We did the same thing in the living space, swapping out an oversized chair for a smaller one and clunky end tables we happened to have lying around for carefully chosen, multi-functional ones.

During Smudgie’s little baby days, we had to tolerate a certain amount of obtrusive baby crap in our living area, like the swing and later the exersaucer. But now that we’re free of those, we seriously limit the number of toys he has. Everything he plays with fits in here: 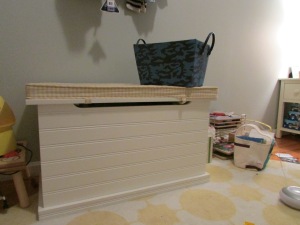 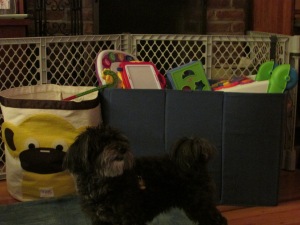 When we pick up the clutter at the end of the night and stick it the designated bins or chests, it really feels like an adult space, not a playroom that we’re begrudgingly allowed to enter to watch some tv. And we also almost never buy him new toys. Birthday/Christmas-time/Easter. Once in a very long while we’ll get him something small at a store. And his grandmothers tend to bring him things. But they know by now not to buy anything too big to fit in the bins…or it finds its way back to live at grandma’s house*.

The thing is, he really doesn’t need more toys. He reads books constantly and dances to the music on his iPod. He plays with brooms and pots and pans in the kitchen and helps with laundry and the dishwasher. We live one block away from an amazing playground and down the hill from an incredible park with a small zoo and we’ve got interesting things to look at and see every time we go outside. So we spend a lot of time outdoors, especially when he’s getting into monkey-climbing mode. While I sometimes feel guilty that he doesn’t have as much space as other kids do, no backyard to run around in or sandbox or water table of his own, I also recognize that he has a lot things other kids don’t have, too. So it works out okay.

That said, things will get tight when the new baby comes, I know that. We are a little nervous about making it all work with Smudgie getting bigger and soon expressing desires for specific toys and the baby needing so many accoutrements. But we’re not moving yet for a number of reasons. Which are!

-School/job. I estimate with baby complications I have 2-3 years before I finish my dissertation. And then I need to get a job. I’d love to continue to work in the city, but I might not get a job here, in which case we’d have to move near the suburb where I do get a job. The thought of potentially moving twice in quick succession seems needlessly troublesome, especially when LG has an amazing 20-minute door-to-door commute via public transportation right now.

– We own our apartment. If we rented, we’d for sure be looking for something new. But the rental market in Brooklyn is insane. And thanks to refinancing a few times, we now pay less in mortgage+monthly maintenance than we would in rent for a similar place, if we could even find one. As far as buying another place goes, forget it. The market is so hot right now, we’d make a killing selling our place. But we’d then have to blow it all on another probably over-valued apartment that we only planned to live in for a few years. Doesn’t make sense.

– Our neighborhood. We love where we live. We love the streets and the people and the parks and the restaurants and the amazing family-friendly activities going on all the time. We’re in a good elementary school zone. I don’t want to move out to the suburbs, rent some place for a few years, struggle to make friends and feel connected while writing a dissertation and raising babies and then have to do it all over again when it’s potentially time to move once more.

So those are our reasons for continuing to live in a place the size of a rabbit hutch that costs us a frightening amount per month. We’re willing to reevaluate after a year of living her as a family of four. Maybe by that point we’ll be ready to move on, whatever the inconveniences.

But in the meantime, we’ll be revamping our bedroom for baby-sharing purposes. Stay tuned for the exciting second part of the series!

* (We are considering getting a kitchen set that will live in his room for Smudgie‘s birthday. I’m on the hunt for a small wooden set, so if anyone has ideas, let me know. Refrigerator not necessary).

[Edit: Sorry about the pictures! There was no technical malfunction. I pre-wrote this post and scheduled it to update on a certain day and then forgot to add the pictures in time. They’re there now. And you got a bonus Bella shot out of the deal!]

Someone tell me because I seem to have misplaced mine.

I always greet the new semester with a mix of dread and excitement, and this one is no exception. The main difference now, I suppose, is just how. freaking. busy the next three months are going to be. Without going too far into the boring details, I can say that I’ve been handling Smudgie’s transition from nanny share to part-time daycare, heading to my college-campus fellowship job anywhere from 1-3 days a week, teaching a class on Sundays, planning Smudgie’s second birthday party, prepping the house for baby (here and there), and trying to finish my second dissertation chapter. And LG is of course slammed at work, too, and has been all summer, so family time is few and far between.

We’re still planning some fall hijinks before our sweet boy becomes a brother– an apple and pumpkin picking expedition, a pig roast hosted by friends, trips around our neighborhood. I’m hoping the frantic schedule we’re dealing with will help us appreciate the time we do get to spend with one another.

Here’s a shot from that last trip. My sweet Smudge-ster getting his first feel of Pacific coast sand: